A Brief History of Frontenac Estates
In 1928, Benjamin and Lora Wood and the Conway Road Estates Company assembled parcels of land in the area south of Conway Road and west of Spoede Road. They subdivided this land into 26 estates and named it “Frontenac” after the Chateau Frontenac in Quebec, which one of the subdivision originators had previous visited. This was recorded in St Louis County on March 1, 1929. These 26 estates were approximately two acres in size. The parkways, roads and stone entrances were all part of the original plat. The roads were named Charlemagne Drive, Orleans Drive, Frontenac Drive and Duchesne Drive, each with its own numbering system.
Because of the Great Depression, the area lay idle until the late 1930’s. In 1941, the Albrecht Family moved into what is now #13 (it was #5 Orleans Dr). Another family, the Durbins, lived at #5 Frontenac Dr. Due to confusion about addresses, the area was re-numbered and re-named Frontenac Estates. The subdivision included the bordering homes on Conway and Spoede Roads. Some early homes are #7, 8, 47, 51 and #60 on Frontenac Estates Dr, 1117 Spoede Rd and 10944 Conway Rd.
Building activity was curtailed during World War II and resumed around 1949. Subsequently, the area was subdivided into 56 lots, with several families selling part of their original lots to newcomers to build new homes. In 1990, the last lot, #35 was added, making a total of 57 lots on Frontenac Estates Dr.
The original corner lot house at 1015 Spoede Rd was built in 1830 and was registered in the Historical Preservation Society. It was used as a safe house in the Underground Railroad network, by African-American slaves, escaping to freedom in the North and Canada.
At the time the subdivision was formed, there was no City of Frontenac. When some of the citizens, including former Frontenac Estates resident Mr. Bill Albrecht, applied for incorporation in order to achieve the desired zoning, the court decided it must encompass what was then the Wright School District. This included an area about three miles along Lindbergh Blvd and about 1 mile deep. The new Village of Frontenac incorporated in 1947. In 1950, when the population rose to over 3,000 inhabitants, the Village became a 4th class city, the City of Frontenac.
(This history was originally compiled by longtime residents the late Freddie Sauer#49, Preston Ryan #31 and Bill Albrecht #13.) 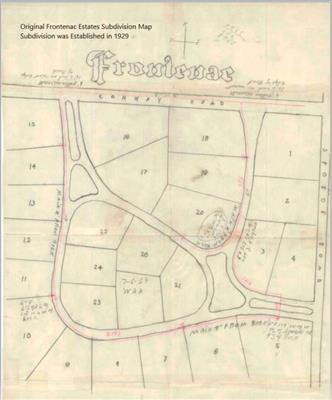 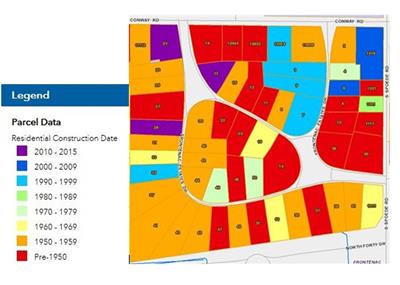